Ben’s twin brother was the star kicker on the high school football team. His eldest brother was a star on the varsity soccer team and coaches already have an eye on his youngest brother. Ben never got that chance, despite the effort of coaches and helpers who carried him down the field in youth league practices.

Ben’s parents first noticed something was not quite right when he didn’t start walking by the typical age, while his twin was in good health and developing normally. They were stunned by the diagnosis – cerebral palsy. He started using a walker followed by a cane and his mother got him on what would prove to be a life-changing waiting list. 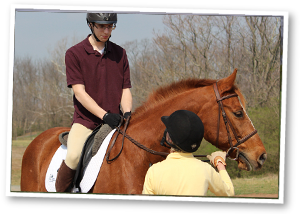 At age five, a spot finally opened up for classes at Loudoun Therapeutic Riding (LTR), the list his mother had fortuitously put Ben on when he was just a toddler. He was hooked. The young boy from an athletic family had found his sport. Just as a football player hits the weight room to condition, Ben hit the ring. He rode as much as he could, along the way improving his posture, balance, coordination and muscle tone. 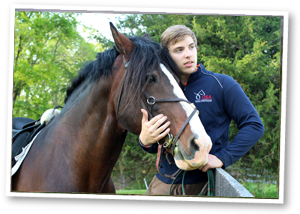 “There’s a magic relationship between a horse and a rider,” shares Lawana, Ben’s mom. Loudoun Therapeutic Riding Director, Joanne Hart echoes this sentiment, “Horses have a ‘sixth sense’ when someone with a special need is on their back.”

Now twenty, Ben can still be found giving back to the program that has done so much for him and is one of LTR’s best ambassadors.

There are plans to build a permanent, expanded LTR facility including observation and therapy rooms, stabling for program horses and an indoor arena to meet growing demand.

“I tell everyone I know about plans for the new facility and really hope it happens soon, “ says Ben. “I shudder to think what my life would have been like if I’d never gotten off the waitlist. Riding changed my life and I know it can do the same for others.”