Join us in celebrating an amazing milestone! As of July 2020, Megan and her family have been a part of Loudoun Therapeutic Riding for 30 years! Megan’s Mom, Kathleen, shares how therapeutic riding has helped Megan grow in independence and confidence.

2020 has certainly been a year of memorable events – some we might prefer to forget and others that deserve celebration.  For our family, July 2020 marked 30 years of our daughter’s – and our family’s – involvement with Loudoun Therapeutic Riding (LTR).  Who knew that 30 years ago when I read an article in the Loudoun Times Mirror regarding LTR, and a subsequent call to put Megan on their wait-list, would evolve into a life-long involvement with LTR and the equestrian community.

Megan began her riding career with LTR at the age of six and immediately took to riding.  From that first lesson her journey with – and love of – horses blossomed.  Over the years she progressed from having a pony leader and two side walkers to riding independently.  As her riding skills evolved, so did her involvement with LTR.  As she became older and her horse and barn knowledge increased, she started giving back to LTR by helping around the barn before and after her lessons.  Whether cleaning buckets, grooming horses for the next rider, sweeping the aisle, or showing a new volunteer the proper way to put a halter on a horse, Megan became ensconced in the LTR routine.  And due to her keen memory skills, she’s sure to let an instructor or barn manager know when a horse is in the wrong stall, if something is amiss, or remind an instructor during lessons if a rider makes a wrong turn in a practice test. 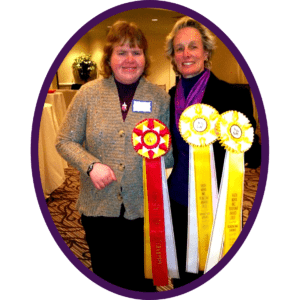 Show Me the Ribbons: It was only natural that Megan’s riding skills would move us into the world of equestrian competition.  This in turn led to several firsts for Megan and LTR.  In 1996, Megan and another rider were LTR’s first competition team to attend the Therapeutic Riding Association of Virginia’s (TRAV) show in Lexington, VA.  Yearly attendance at the TRAV shows led to the next step for Megan – dressage shows.  In 2000, Megan was LTR’s first rider to compete at an open dressage show riding the U.S. Dressage Federation’s Introductory Level tests on LTR’s “Grayson”.  As her level of riding improved (Megan was also LTR’s first rider to canter) she eventually moved up to Training Level tests, and delved into the world of musical freestyles.  This love of showing – from the travel, to packing up everything that needs to come with the horse (and the horse!), to interacting with show participants resulted in horse ownership for Megan and subsequently the ability to compete in shows within Virginia, Pennsylvania, Georgia, and Vermont.  We think of it as a “travel team” but with four-legged team members.

To her credit and that of her instructors, Megan has had multiple highlights in her riding career but two stand out:  When she and LTR’s “Thomas” rode a musical freestyle in front of 500 attendees of what was then the North American Riding for the Handicapped Association’s (now PATH) annual conference hosted at Morven Park, and in 2016 when she and LTR’s “Jolie” were the Virginia Dressage Association’s year-end Grand Champions at the Introductory Level. 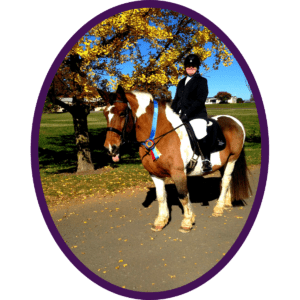 The Great Equalizer:  Megan’s participation in open dressage shows – competing with able-bodied riders – is what we like to refer to as “the great equalizer.”  Helmet on and in the ring, there’s no differentiation between who “can” and “can’t” do something as judging is based on individual skill level – the ability of the horse and rider to perform the required movements and the accuracy of the test being ridden.  Megan’s riding abilities level the playing field when she shows, which was particularly important in high school when her classmates were surprised to see her not only competing but receiving competitive scores without any special consideration.  Even now when she competes, there are still adults who are surprised to see Megan ride.  Again, riding is a great equalizer as her scores prove that she is capable of competing in an open show.

Awareness:  Megan’s involvement over the years with the local dressage association has elevated awareness of LTR and therapeutic riding in general.  Whether she’s competing or volunteering at dressage shows, participants associate Megan with LTR and she’s more than happy to tell them all about her Wednesday afternoon lessons with Miss Debbie or offer to introduce them to her beloved Jolie (Megan and Jolie have had a special “mojo” and have been a team since the day Jolie arrived).  Megan now works for ECHO (Every Citizen Has Opportunities) at their INOVA Lansdowne Campus and is always running into someone she knows from a show or a local barn.  Last fall Megan and I attended Dressage at Devon in Devon, PA, to watch the competitions.  Megan was wearing her LTR polo and a woman approached us who recognized Megan noting “you’re the rider who rode that large paint horse (Jolie) at a show at Morven.”  To have an LTR participant recognized in another state speaks volumes.  Megan’s “promotion” of LTR has also encouraged others to pursue therapeutic riding experiences for themselves or for someone they feel could benefit from such a program.

Impact:  Aside from bringing the color purple to LTR (she was an equestrian fashionista before it was fashionable) – all of Megan’s experiences are a culmination of her involvement and growth with LTR over the years, and in some respects LTR also grew based on 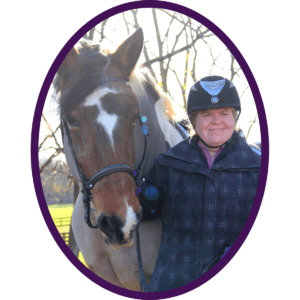 Megan’s desire to expand into the competition arena.  Always wearing her LTR logo-wear, Megan’s “oneness” with LTR is evident.  Her enthusiasm for riding and being at the barn, her willingness to help others, and her love of the horses and instructors are all a reflection of the impact LTR has had on her life.  LTR is her second home, and the instructors and horses are her second family – and we could not ask for a better second family.

Kathleen is right. While the year 2020 has been full of challenges, milestones like Megan’s are a reason to celebrate! Loudoun Therapeutic Riding has been helping those living with disabilities in our community realize their full potential for almost 50 years. To help another individual feel the same joy and accomplishment as Megan, consider making a donation to Loudoun Therapeutic Riding here. Together, we can start 2021 off on the right hoof!

Give Joy, Donate for the New Year!