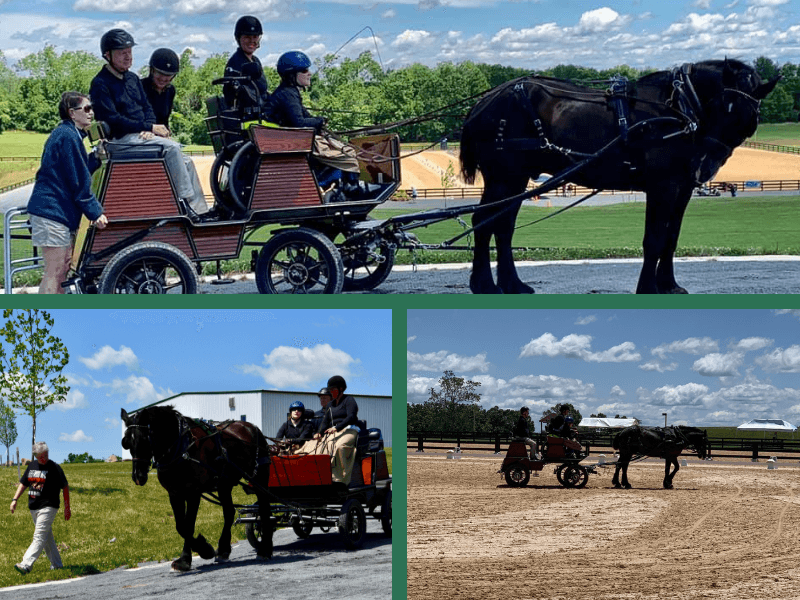 Amy Stone’s wheelchair may prevent her from driving a car, but she can drive a carriage!  On Friday, Amy drove Duke, a 17-hand Percheron, who was hitched to Loudoun Therapeutic Riding’s Van den Heuvel Adaptive carriage, in the Morven Park Carriage Show Arena Driving Trial Training Level Dressage Test.  For Amy, who lives with cerebral palsy,  this was her first time participating in a competition with able-bodied individuals.  “Very cool” is how Amy described the experience.  “When I am driving, I am free.”

24 year-old Amy has been riding and driving since she was 7 with Loudoun Therapeutic Riding (LTR), which is located at Morven Park.  In addition to individuals like Amy, Loudoun Therapeutic Riding’s carriage driving program plays an important role in serving military veterans who are unable to sit astride a horse. Recent research shows that interacting with horses reduces PTSD symptoms significantly.  LTR serves all veterans free of charge in their “Equine Services for Heroes” program.

Loudoun Therapeutic Riding’s wheelchair accessible adaptive carriage was custom built in Holland in 2009  and is a “one-of-a-kind” in the United States.  The Army Caisson Platoon at Ft. Meyer donated the carriage to Loudoun Therapeutic Riding in 2013. Here’s also a link to a TV appearance in which Amy talks about carriage driving:  http://www.fox5dc.com/news/pay-it-forward/pay-it-forward-loudoun-therapeutic-riding-helps-vets-and-people-with-disabilities